The construction and sale of apartments in Innova Concept, another project by the FPP group carried out in Wrocław’s Krzyki, has begun 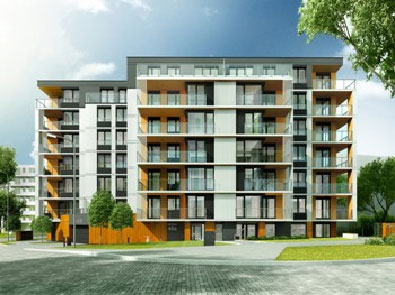 Innova Concept is the fourth investment that FPP has begun in the area of ​​Nyska and Piękna streets in Wrocław. After the implementation of Osiedle Innova, Osiedle Moderno and Apartamenty Innova, the developer known for its prestigious investments on the Wrocław and Warsaw markets, initiated the construction of another project in Wrocław.

Innova Concept investment offers 144 comfortable apartments of various layouts and sizes. The building will include premises from 30 sq m. up to 105 sq m., with 4 commercial premises on the ground floor. The prices of apartments range from gross PLN 7797 / sq m. up to PLN 9197 / sq m. Construction works related to the implementation of the project began in March, 2019. The deadline for handing over the keys to the apartments is set for March 2021. The general contractor of the investment is Haras Budownictwo.

A high class, six-storey building with a facade maintained in warm colors was arranged in a modern style. The use of glass, metal and wooden finishing elements gives it a classical and elegant character. All apartments in Innova Concept have been designed with particular attention to the functional layout of the rooms. A feature that distinguishes them are high, panoramic windows and spacious terraces that allow for arrangement of comfortable space to relax. The quality of investment is determined not only by its great location, but also by the use of innovative architectural solutions, functional layout and careful finishing of common space in the building, as well as direct access to the green areas.
The architectural design of the building was developed by DPA Dorożyński Pracownia Architektury– DPA Iwona Dorożyńska studio. The investment envisages the construction of a square intended for children to rest and play in, located in the area of ​​the inner patio. From the southern side, the recreation square will be located right next to the public elementary school, and on the west and east side it will be surrounded by the wings of the building.
The storage rooms will be located on the ground floor and in the underground garage on level -1. In addition to parking spaces for cars in the garage, there will also paces designated for single-track vehicles, as well as bike racks. Car parks will also be provided outside the building.  Innova Concept is located next to the previously completed by FPP residential complexes: Osiedle Innova, Osiedle Moderno and Apartamenty Innova. The investment is well connected with the very center of Wrocław. There are bus and tram stops nearby, and the Main Train Station in Wrocław is 2 km away from the investment.
In addition to the advantages associated with public transport, the location of Innova Concept also provides attractive infrastructure solutions. In the immediate vicinity of the building there is a primary school and two kindergartens. It is also close to the University of Economics and the Institute of Pedagogy of the University of Wroclaw In the close proximity of the investment, there are shops, shopping malls and numerous service points. In addition, the district has many urban parks and recreational areas. Innova Concept investment is financed by Getin Noble Bank SA.

For more information go to www.innovaconcept.pl

FADESA POLNORD POLSKA Sp. z o.o. (FPP) was established in 2005. The company’s shareholders are Spanish company MARTINSA-FADESA S.A. (51% of the capital) and Polish company POLNORD S.A. (49% of the capital). The headquarters of the FPP company is located in Warsaw (Aleje Jerozolimskie 94). From the beginning of its activity, FPP has sold and handed over 3 thousand apartments.

FPP has been present in Wrocław since 2007. Construction of their first Wrocław investment, Osiedle Innova, began in 2010. Up until 31 December 2018, the company sold 1221 apartments and commissioned 1043 flats in Wrocław. Innova Concept is the fifth investment of the FPP group and the fourth one implemented in Wrocław. The contractor is a special purpose company FPP Osiedle Moderno Sp. z o.o., the capital of which comes 100% from the FPP group. The Innova Concept investment is financed by Getin Noble Bank SA.